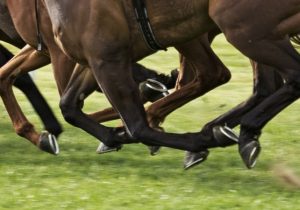 EPM has been around for a long time, and the horses in the United States seem to have developed some immunity to the disease. The horses that I see with severe symptoms, such as getting down and unable to rise; are usually very weak, very stressed, or very old. The symptoms that I see in Texas these days are hind limb weakness, problems knowing where their feet are, performance problems, and horses who become very irritable for no reason. Over 85% of the horses in Texas test positive for EPM, but many of them do not show symptoms that their owners recognize. Perhaps some of them were a little “off” for a week or two while their immune system battles the disease, or perhaps their immune system was strong enough to fight the protozoa off when it was introduced into their body. The life cycle of the sporocyst involves many intermediate hosts who are then ingested, often as “road kill” by an opossum. The opossum is the definitive host where the sporocyst can develop. The sporocyst is then passed out in the opossum feces. The sporocyst enters the horse through the mouth, when the horse ingests feed contaminated with opossum feces. The horse is a dead end host, and does not pass sporocysts in it’s manure. The sporocysts in the horse go to the brain and spinal cord only. This means that an infected horse cannot infect another horse.

Opossums are scavengers, and will eat any dead animal. One way to protect your horse is to keep feed locked up in a manner that opossums cannot get to it. There is no way, however to protect your pastures from opossum manure. You can reduce the chances of opossums eating an intermediate host on your property by picking up any dead animals that could be intermediate hosts for the disease. Sarcocystis has been found in skunks, raccoons, armadillo, domestic cats, sea otters, and even harbor seals. I realize sea otters and harbor seals should not be in contact with your horse, but the fact that it is found in them means there could be a very large group of intermediate hosts, making prevention more difficult.

There is no vaccine for EPM. The veterinary community has gone back to treating EPM with Diclazuril, which is a product used to prevent coccidiosis in chickens. I used this product over 20 years ago to treat EPM when I was in Arizona. I think it may help, but not cure a horse with EPM. It comes in many new packages, with many new names, but the ingredient is the same.

Early Diagnosis also helps. I want to treat the EPM when it is first entering the horse, before it can damage the neurological system. I diagnose EPM using Osteopathy. A horse with EPM will present first with problems of performance, such as not getting to the bottom of their stop, not sitting at their barrels, being clumsy, being irritable, hitting jumps, wobbly in the rear end,unable to engage their back, etc. When I examine the spine of these horses, one side will be very flexible and the other side will be very stiff. It tells me that EPM is a possibility that I need to rule in or out. Horses that are suffering from EPM will also be painful around the occiput and atlas, due to the inflammation going on in the spinal cord. If you have the horse walk and have someone walk behind them and pull them by the tail off to one side, they will be unable to right themselves. Their rear end will follow their tails. I like to send blood off to California Davis, using the IFAT test to diagnose the disease. If, for some reason, the test results are negative; I will recheck the horse, and if I still feel the horse presents with symptoms of EPM on an osteopathic exam, I will treat.

Most of the horses who contract EPM have a weakened immune system. This allows the protozoa to enter the nervous system and cause inflammation in the spine. In Texas, one of the destroyers of the immune system is an abundance of L4 strongyle larvae at the anterior mesenteric artery. We have a huge worm problem, due to the climate not being overly hot or cold. The worm eggs are not destroyed by a nice hard freeze of long duration like in the north, and we do not have the dry heat found in Arizona and places in the desert where the eggs are dehydrated. The L4 larvae present at the anterior mesenteric artery weaken the immune system, predisposing the horse to contract EPM if the horse ingests a sporocyst. These horses will present with more stiffness in the spine than a horse with EPM alone. They will still be sensitive at the top of their head, near their occiput and their atlas, at the top of their neck.

I will treat the horse first for the L4 larvae, using a Panacur Powerpak with sufficient dosage for the horse’s weight. This is a double dose of the Panacur for 5 days in a row. I will then wait ten days for the horse to recover from the Panacur, which I feel paralyzes the L4 larvae but does not kill them. Then I will administer Quest Plus in an amount equal to the horses weight. The Quest Plus will come in and kill the L4 larvae, since they are already paralyzed and unable to run away from the blood vessels which carry the chemical to kill them. I will repeat with a regular Quest dosed to the horse’s weight ten days later to get as many L4 larvae as possible. After all the dewormer has been administered, I will wait at least 5 days after the last dose, and then start the Sefacon. I will give a product called Karbo Pellets and another called Epic liquid during the deworming to help strengthen the immune system of the horse.

A strong, healthy immune system will help to protect your horse from EPM. I like to keep my horses on Chlorella, which helps clean up any heavy metals in their system and provides them with a healthy food source. The more stress on a horse, the more likely they will have a weakened immune system. I see more cases of EPM in young horses who are just going into training, having to deal with the stress of leaving home and the stress of being trained. Performance horses who travel a lot are also at risk. I like to put these horses on a product called Karbo Combo. It is an immune system booster. It is a small pellet that is fed in very tiny amounts every day. I like to keep any horse that is in a stressful situation on the Karbo Combo continuously. It helps with digestion as well as immunity.

When a horse presents with a mild case of EPM, If they are not in a stressful situation, I may put them on the product called Karbo Pellets and the other product called Epic that comes in a gallon of liquid. I feed two scoops of the pellets and 60cc of the liquid two times a day for three months. If the horse is in a stressful situation, or the EPM is coming in fast and strong, I will put the horse on a product called Sefacon, as well as the Karbo Pellets and Epic Liquid. The Sefacon is a ten day herbal treatment, and the horse is usually very improved in three weeks. It is very important to treat the horse with sufficient Sefacon for their weight. I will use double doses in a large (over 1200lb) horse.

If I have a horse that is already very ataxic and wobbly, I will sometimes try Marquis to get them under control before I start the regular treatment. I have not seen much true cure with Marquis. Often the horse will get better for 4 months, and then have problems with the protozoa returning. I only use it when I need to kill off some protozoa rapidly to save the horses life. For the long term treatment, to get the horse truly over the disease where it never returns, I use the Karbo Pellets, Epic, and Sefacon.