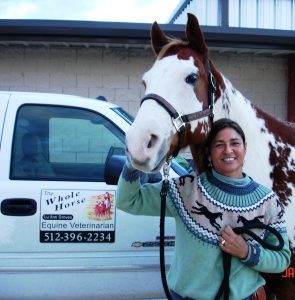 Dr. Groves graduated in 1981 from Colorado State University College of Veterinary Medicine. She has been an equine veterinarian for 39 years, and horses have been her life passion.

After graduating from vet school in Colorado, she learned to play polo with the local team back in Tucson. She became an honorary member of Therapeutic Riding of Tucson, donating her time to care for the horses used to help handicapped riders. She worked for another veterinarian for a year and then opened her own mobile equine practice. Dr. Groves went back to barrel racing, winning the Southern AZ Barrel Racing Championship in 1983 in two divisions, on two different horses. In 1986, she took up endurance riding. She won several first place and best condition awards between 1986 and 1994. In 1994, she won the Southwest Regional Championship 100 mile endurance ride in Williams AZ.

In 2000, she moved to Texas from Arizona. After working for a few years as a mobile vet, she opened The Whole Horse Veterinary Clinic. After a stint at learning to cut on her mare, Dr. Groves has taken up mounted archery.