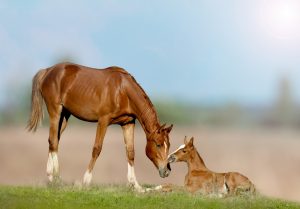 Your mare has carried her baby through the winter. She has been vaccinated with a killed type of rhinopneumonitis vaccine during her fifth, seventh and ninth month of pregnancy to prevent abortion. Four to six weeks before her due date, I recommend that you give her a sleeping sickness-tetanus booster (EWET), to increase the antibodies in her colostrum. As her due date approaches, make sure the area where she will foal is clean and safe. The fence should be low enough that the baby cannot fall asleep and roll outside the corral or stall. Your mare will carry the baby for approximately eleven months.

Signs that she is getting close to foaling will include milk in her udder a week or two before foaling. The muscles around her vulva will relax. Approximately twenty-four hours before she has the foal, her teats will get wax on the ends. She may have some false labor pains where she gets up and down repeatedly, repositioning the foal. She may not have the baby at this time. If you do not see her water break (a large volume of water), and she goes back to eating and acting normal, she was probably just repositioning the foal. Once her water breaks, she should deliver the foal within one hour. The front feet will come out first, with the nose between them. If you do not see both front feet and the nose, the foal may not be positioned correctly, and you should call your veterinarian. If the mare is having trouble delivering the foal, and you have to help her; pull downward and outward on the two front legs with the mare’s contractions. If the delivery is going normally, it is better not to disturb the mare and colt until after the umbilical cord breaks. The mare is transferring blood to the baby via the cord, and you don’t want to disturb the pair and cause the mare to jump up and break the umbilical cord prematurely.

The foal should stand and nurse in one to one and a half hours after birth. The mare should pass her placenta within four to six hours after the baby is born. If the mare has not passed her placenta four hours after she has foaled, let your veterinarian know. Sometimes a first time mother will have a sore udder, and may squeal or move away from the foal when it tries to nurse. Other mares are so protective of the foal that they will not let it out of their sight, and they keep rotating with the foal, not allowing it to get to her udder. Put a halter on the mare and hold her steady, encouraging her to let the foal nurse. If she is very resistant to letting the baby nurse, you may have to twitch her. Once the baby is allowed to nurse a few times, the pressure on the udder will be decreased and not so painful, and the mare will become accustomed to the feeling, and probably will allow the foal to nurse on her own.

Once the mare and baby have had a chance to bond, you can dip the foal’s umbilical cord stump in a syringe case or shot glass containing 1 part chlorhexidene solution and 8 parts water. You can also use betadine solution. A study at California Davis vet school shows that chlorhexidene is the best choice of disinfectants to use on the umbilical cord. I think it is a good idea to give the foal a mineral- oil fleet enema at this time. You can buy these at the pharmacy. Get the ones with the orange tops. If you cannot find them, the ones with the green tops are ok. (These have DSS instead of mineral oil as a lubricant, and too many of these can be toxic to the foal.) Have several bottles on hand, in case the foal is straining to defecate. The first manure passed will be hard and black. This is the meconium. Sometimes it gets stuck in the rectum, and the mineral oil enema helps the foal to pass it. The foal will need a tetanus antitoxin shot within the first 24 hours after it is born. You can either give the baby the shot yourself, or have your veterinarian give the shot when he or she comes out to do a well-baby check. I usually like to see the foal when it is around 12- 24 hours old. I will check the placenta to make sure the mare has passed all of it. I will make sure the mare did not tear her vulva when she delivered the foal. Sometimes the mare will get constipated after she foals. Keep an eye on your mare’s manure after foaling, and if it is hard and dry, give her a warm bran mash with a little mineral oil in it to soften her stool. During the well-baby check, I perform a thorough examination on the newborn foal, checking for any sign of future problems. I make sure the heart and lungs and abdomen auscultate normally, that the legs are straight and the joints are not filled. I want to check the eyes for cataracts, the mouth for soft palate abnormalities, and make sure the umbilical cord has separated correctly. I will check the foal’s feces and make sure it is nursing. If there is any question about the foal getting sufficient colostrum, we can draw blood and check the foal’s IGG levels at this time. I will ask if you have seen the foal urinate. Once in a while a foal can rupture its bladder and you will see urine dripping from the umbilicus. If you see a yellow substance dripping from the umbilicus, or the foal straining to urinate or defecate, let your veterinarian know.

After the first check-up and vaccinations, I will see the foal again at two months of age to give a dewormer and the foal’s first vaccinations. This first vaccination is usually for tetanus and possible sleeping sickness as well. Booster shots will be given four to six weeks later. I like to give one vaccination at a time instead of giving the foal everything at once. This allows his immune system to develop more naturally. We have learned that the foal will have better immunity to flu and herpes virus if he is not vaccinated for these illnesses until he is at least 9 months old. His mother’s colostrum will provide him with antibodies to these diseases until then. Foals are very susceptible to parasites, and should be dewormed every 6-8 weeks during the first year of their life.