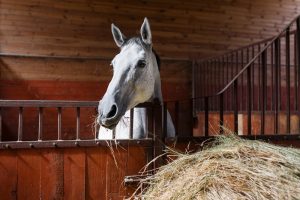 Good record keeping on the owner’s part can be a big help when a mare fails to conceive. Information about the mare’s previous breeding and foaling history can be very helpful. Sometimes we can save the owner money by knowing what has already been tried, and we can review the previous history for clues about why the mare did not conceive this time. Was the mare under lights since Thanksgiving? If so, she should cycle earlier in the spring. If she was not under lights, she may not have good heat cycles until mid March or April. An external exam of the mare can also give us information about the problem. We look at general body condition and her reproductive anatomy. Older mares often become “tipped” in the area of their vulva, allowing manure to fall onto the vulva lips and then move forward toward her cervix. This can cause a low grade chronic infection in the mare’s uterus, preventing her from carrying for more than 30 days.

Mares that are flat over their croup with a high tail set and a vulva that is more than 20 degrees off vertical tend to have more problems with both contaminations by manure and pooling fluid in their uterus post breeding. Mares that pool fluid in their uterus post breeding will often conceive if they are flushed six to eight hours post breeding to clean out the debris. When a mare is in estrus, her uterus should have good tone, the cervix should be open, and the follicle should be evident on palpation of the ovaries. Palpation and/or ultrasound during estrus can provide valuable information on possible causes of infertility.

We can use a vaginal speculum to evaluate the mare’s cervix. Proper cervical function is needed for a successful pregnancy. A cervix that is torn or has adhesions may not close properly once the mare is pregnant. A cervix that does not open when the mare is in heat can prevent her from becoming pregnant if bred by live cover. If she is inseminated, she may have difficulty getting rid of the uterine fluid accumulation post breeding. We like to evaluate the cervix both during the mare’s heat cycle and when she is out of heat.

We use both a uterine culture swab and an endometrial cytology to give us the most accurate information about the presence of bacteria and/or inflammation in the mare’s uterus. If the swab comes back positive, but neutrophils are not seen in the cytology, the bacteria are considered to be a contaminant that is not causing any problems. If the culture yields bacteria, and neutrophils are seen on the cytology, we know that the bacteria area pathogenic. Sometimes the culture will come back negative, but we will find inflammatory cells in the cytology. In this case, the uterus must still be treated to eliminate the inflammation.

An endometrial biopsy can help predict the likelihood of a mare carrying a foal until term. If there is a thick ribbon of mucus seen, mucolytic agents may be needed to clear the uterus before antibiotics are administered. With very difficult cases, we sometimes use an endoscope to view the inside of the uterus directly. We do this when the mare is in diestrus. Mares who were bred last year but did not conceive should be brought in for an evaluation at least two heat cycles before they are scheduled to be bred. This gives us time to find the problem and treat it prior to the scheduled breeding date.