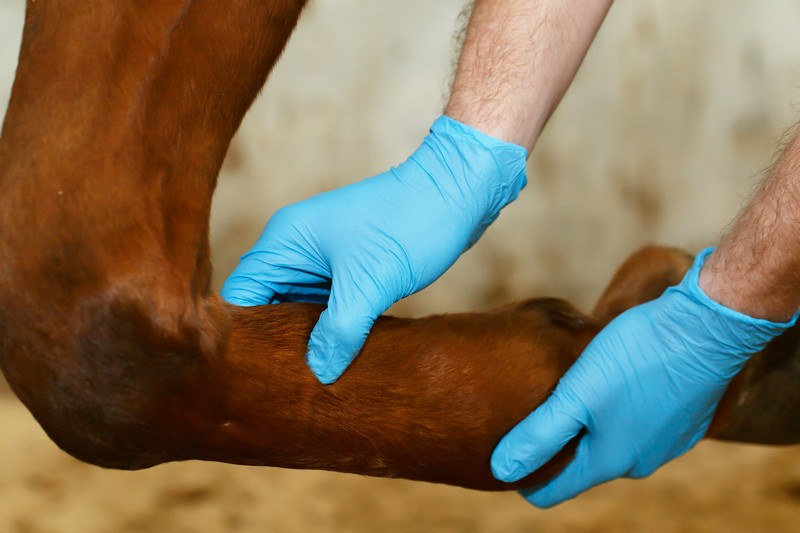 If your horse is moving stiffly, he could have toxins in his fascia and joints.  Toxins enter your horse’s body from the air, in their feed, from fertilizers, from the soil in their pasture, and sometimes from their supplements.  You need to read the labels on everything you feed them.  You want to make sure the feed you are giving is not making your horse toxic.  You must watch for toxic preservatives and anti-coagulants.  You need to add up how much total fat soluble vitamins and what kind of minerals are in your feeds and supplements.  Feeding too much of fat soluble vitamins or an imbalance of minerals can harm your horse.  Fat soluble vitamins are A, E, D, and K.  They are stored in the body fat, and can build up to toxic levels.  Non-ionized minerals are not well absorbed by the body, and can also lead to imbalances and excesses.  Minerals should always be fed in the ionized form.  Ionized trace minerals provide the body with the components necessary to run the chemical reactions, like the sodium potassium pump.  You can purchase ionized minerals such as ConcenTrace on the internet.  Horses are fed the same amount as recommended for humans.

Here are some examples of toxins that your horse could be exposed to:  In the air, cadmium from automobile exhaust.  In the feed, preservatives and anticoagulants. Examples of preservatives are ethoxyquin, a rubber stabilizer; propionic acid, often it is not the naturally occurring one found in apple cider vinegar, but is the undesirable synthetic version; citric acid, made using genetically modified corn; MSG(monsodium glutamate)  which is found in soy and whey proteins, and could cause gut inflammation; synthetic vitamin E, which differs from naturally occurring vitamin E because it is derived from petroleum products; and BHA and BHT, both of which are known to be carcinogenic and act as endocrine disruptors in the body.  Endocrine disruptors may shut off, turn on, or modify signals that hormones give the body.

Here are some examples of substances that are used as anticoagulants in the feed.  Aluminums such as zeolite, which is an aluminosilicate adsorbent, seen in those little packets that come in vitamin bottles that say do not eat, bromine, often used for fumigation of feedstuffs and will damage nerves and the thyroid gland; and diatomaceous earth, which has sharp silicate crystals that can damage the lungs if inhaled.  Green clay, also called bentonite or montmorillonite clay, can be helpful when fed for short time periods, but can decrease the absorption of nutrients if fed constantly.  Pasture soils can be contaminated with heavy metals.  You can send in a soil sample to be tested for heavy metals.  You can also send in a water sample to be tested as well.  Water is often contaminated with arsenic and other heavy metals.  A good hair analysis lab can be helpful in checking for heavy metal contamination in your horse.  Spray fertilizers and weed killers can also be toxic to your horse.  Glyco-phosphates (Round-up) damage the myelin sheath around a nerve.  This myelin sheath is made up of fascia.  Horses should be removed before pastures are sprayed, and give the grass a few days to clear before putting the horses back out.  Remember, the wind can carry spray from one pasture to another, and from a neighboring pasture to yours.

Drugs can deposit toxins in the fascia.  Examples are:  sedatives(xylazine and detomadine), NSAIDS (non steroidal anti-inflammatory drugs), such as phenylbutazone (bute), flunixin meglumine (banamine), and firocoxib (equioxx and previcox), steroids (dexamethasone and prednisone), and antibiotics.  You should avoid long term use of any of these drugs when possible.  Always give probiotics after an antibiotic treatment, and flush the drugs out of the liver using milk thistle tincture.  It is a good idea to give a homeopathic or herbal detox after all of these drugs. We will often give the homeopathic remedy nux vomica after an osteopathic treatment that involves heavy sedation.  The nux vomica will help clear the body of the sedatives.  We will also give arnica montana to relieve muscle and fascial inflammation post osteopathic treatment.

All of the toxins discussed are stored in the fascia and the joints of the horse.   So, what exactly is fascia?  Fascia collects waste from every cell and moves it out of the body.   It nutritions the joints.  Fascia forms a criss-cross matrix that acts as structure and stability for the body.  Fascia is made up of fibrous collagen and elastic connective tissue fibers.  It runs from the external part of the body, under the skin and wrapping around your muscles, to the inside of your body, wrapping around all of your organs and entering into each and every cell.  Fascia surrounds every nerve in your body.  The fascia can respond to stimulus five times faster than a nerve can.  Fascial cells outnumber nerve cells ten to one.  There are more sensors in the fascia than in any other system, including the nerves.  When you condition your body with repetitive motion, it is the fascia that thickens. The fascia is flexible in a specific way, moving within its boundaries.  It is an energetic substance, it absorbs and recoils energy,  putting the “bounce” in our step.  Fascia does not stretch much, but it can adapt to the forces we put on it.  Fascia is more like a plastic, that can bend or thicken with slow strain on it, such as isometric strain.  Fascia will tear if you put a large, sudden strain on it.

Say your horse slips in the mud, or falls turning a barrel.  This causes a mechanical strain to the fascia.  A mechanical  strain causes a peizo-electric charge, which causes all the negative ions to line up on one side and all the positive ions to line up on the other side.  This is called an electrical potential.  It is the chaotic nature of the fascia that keeps motion possible.  The electric potential changes way the molecules bind by polarizing them.  When the fascia becomes polarized, motion possibilities are restricted.  So, a muscle strain polarizes the fascia, causes restriction, and when the fascia can no longer slide on itself, it congests.  When it congests, the blood supply is decreased, waste products are not moved out, nutrients are not moved in, lymph flow is decreased, and dehydration occurs as it dries out.  Congestion is the mother of all disease. Over time, the presence of toxins and congestion in the fascia causes it to become fibrotic, and no longer flexible.  The amorph matrix part of the fascia becomes more “gel like” and metabolites and toxins collect there.  The damage becomes chronic, and the horse may move stiffly and out of balance. Traveling this way will put excessive strain on the joints as well.

The thyroid gland is affected directly by the toxins themselves.  It needs vitamin C and iodine to function properly.  Iodine is required to make T3 and T4 in the thyroid.  Anticoagulants attach themselves to the iodine receptors and block the iodine from attaching.  This keeps the T3 from forming so it cannot influence the adrenal gland to release cortisol.  Instead, the T3 gives off alkaloids, which are bad for the system.  T4 is used by the liver for waste disposal.  A lack of iodine to drive the reaction to make T4 results in more toxins building up in the fascia because the  liver is unable to remove waste products.

The fascia around the thyroid gland must be flexible and unrestricted for the thyroid to work properly.  The horses teeth and feet have a huge influence over the fascia.  A horse that has no functional occlusion in his teeth, or has been improperly trimmed, with feet that are out of balance; will have more toxins in his fascia.  The hyoid bone in the tongue can influence the tempromandibular joint(TMJ), which can influence the pituitary gland and the thyroid, as well as the occiput and the first cervical vertebrae.  Imagine that the horse has a cog wheel or series of pulley’s attaching his hyoid bone to his TMJ, and so on.  The pulleys then attach his head to his body and his feet to his legs.  This series of pulley’s needs to be in balance for these cog wheels to turn properly on each other.  If the feet or teeth are not properly cared for, they will be out of balance, and the resulting strain on the fascia will cause fascial restrictions and congestion.

Toxins can affect your horse’s personality.  The effect of toxins on the brain are bad moods, vertigo, headaches, poor memory and concentration and erratic behavior.

In summary, these toxins are causing your horse to move stiffly due to the congestion in his fascia, behave erratically due to the effect of toxins on the brain, and have decreased enzymatic reactions due to the blockage of iodine on the receptors, resulting in poor organ function.

So, how are we going to get these toxins out of the horse?  We can feed kelp, to provide iodine without overdosing it, Vitamin C (rose hips or camu camu) to clean the fascia, please, no synthetic vitamin C.  Synthetic vitamin C is worse than no vitamin C at all.  You can use milk thistle long term to flush the liver, and dandelion herb short term to rebuild the liver.  (I prefer to use tinctures).  CO Q 10 will provide glutathione for the liver.

Artichoke for three weeks to flush the pancreas, you don’t want to use artichoke long term.  Give goldenrod tincture(solidago) for the kidneys.  Chlorella Vulgaris is great for your horse every day, and it will help clean out and keep out heavy metals.  Make sure it is cracked cell wall and from a reputable source.  Chlorella should smell clean and fresh when you buy it.  You can use homeopathic thuja occidentals to rebalance the system and nux vomica to clean out the toxins.

How do we prevent the ingestion of new toxins?  Try to feed certified organic feedstuffs.  Look for non GMO ingredients.  Buy feeds from mills that only make horse feed, to avoid contamination with toxins such as monensin used in cattle feed.  Seaweed can be contaminated with arsenic, lead and aluminum.  Ask for a certificate of analysis from the company using seaweed in the feed.  Buy rice bran from an area where the arsenic levels are low.  Dehydrated coconut meal is a good choice.  I often add Timothy pellets to increase palatability.  Roughage is the most important feed that you provide to your horse.  Make sure your horse is getting a good quality roughage and that your pasture grass is safe and nutritional.