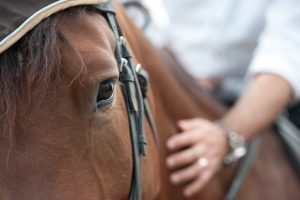 This is a technique that works on the fight or flight mechanism of the autonomic nervous system. It really helps a horse who had some sort of trauma that put him in a “fight or flight” type of response. Whether the horse got injured physically, or just got scared, he can get “stuck” neurologically in that place. This technique will release the tension on the autonomic nervous system that was caused by the incident. It can help both mental and/or physical issues.

Animal Bio Energetic Synchronization Technique (Animal BEST); is a type of energy work which balances the body and updates memory patterns so animals can heal. BEST gives animals increased immunity, pain relief, behavior stability, stimulated cellular and tissue repair, and increased performance. B.E.S.T. offers animals help in two most important aspects of their health, re-integration of the nervous system and improved nutrition. Many horses have problems with ulcers, and these ulcers can interfere with digestion. A “leaky gut” can be the inciting cause of poor nutrition and the resulting weak immune system of the horse can lead to many different illnesses. When a horse is unable to fight or flee due to confinement and training, he can end up in sympathetic/parasympathetic imbalance. The Animal Best procedure provides the opportunity for us to re- balance those two systems.

A more detailed explanation of what the technique does and how it does it follows:

Both imagined and true physical danger activates the sympathetic nervous system of the horse. Strong negative emotions brought on by this perceived or imagined danger can spark a threat response in the horse. The defense physiology is an increased sympathetic tone, causing muscle tightness. This response can keep the body in the fight or flight mode a lot longer than the horse could actually sustain this activity. This muscle tightness can either cause lameness over time, and/or cause a fear type mentality in the horse. Muscle tone is controlled mostly by muscle spindles activated by gamma fibers coming from the cerebellum. The main cause of the restricted range of motion of joints may be uncooperative, antagonistic, relaxation of the muscle spindles.

Most all chiropractic techniques will affect the muscle spindle or golgi tendon apparatus either directly or indirectly during the adjustment phase. The Morter Bio Energetic Synchronization Technique is a non forceful chiropractic technique that removes interference from the nervous system by the use of the hands. The primary objective of the BEST technique is the re-establishment of homeostasis to the body by allowing the muscloskeletal system to resume muscle symmetry that will allow for a repositioning of the vertebra and contiguous articulations, as well as improved visceral function and the reduction of neurological anxiety and defense physiology.

This is a non forceful chiropractic technique that removes interference from the nervous system.

The primary objective of the Morter B.E.S.T. Technique is the re-establishment of homeostasis to the body by allowing the musculoskeletal system to resume muscle symmetry that will allow for a repositioning of the vertebra and contiguous articulations, as well as improved visceral function and the reduction of neurological anxiety and defense physiology.

The Animal Best Technique is a soft tissue spinal manipulation, with light forces being applied to the spine and contiguous areas such as the vertebra, sacrum, head, abdomen, sternum, and extremities. The horse responds by lowering his head, licking and chewing, relaxing, sighing, yawning, and stretching.

B.E.S.T. Technique balances the sensory system so that the impulses it provides to the motor system are accurate, complete, uncompensated, and appropriate for the present need. A horse that is in the “fight or flight mode” will calm down and relax and often fall asleep when the technique is applied. The muscles that were in defense physiology become relaxed when the sensory system is balanced.

We are presently running a special on the B.E.S.T. Technique, $85 for one treatment in the clinic. Call to schedule an appointment.